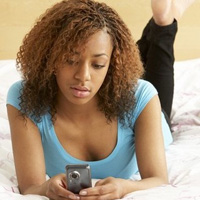 If you’ve recently got a guy’s number, you may be wondering how to text a guy you like. Do you want to know something interesting? Texting him doesn’t have to be difficult at all! You may feel nervous, you may be shy, but follow this guide and you’ll get that guy!

When it comes to texting him, it’s more about what you shouldn’t do rather then what you should do. In all honesty, you can text him talking about nearly anything and it won’t be a problem. You will want to avoid doing a few things though, as these can seriously ruin your chances of making a good impression of yourself. What are these things I hear you ask? Well, read below and you will find out.

Making Your Text Conversation Two Way (No One Word Answers)

When it comes to text messaging a guy, you need to remember one important thing: You need to make the conversation two way! I’ve been in text talks with people where it’s me making all the effort. You text them asking them a question, and they reply with “Yes”. You then ask them another question, and they reply “No”. I would then ask them an open ended question to try and get them to talk more, and they simply reply with a short sentence which doesn’t really lead anywhere.

If you like a guy, messaging him like this is not acceptable. He will likely get bored of you, or at least question if you really like him at all.

The important thing when in text mode, is making it two way. As well as answering questions, you also want to ask them as well. You want to get to know a bit more about him, and guess what? You can only do this by asking him questions.

When it comes to answering his questions, instead of just saying yes or no, why not elaborate on those answers. Turn “Yes” into “Yes, they are…”, or “Yes, I’ve…”. This will make things a lot more interesting for you both. You can get more in-depth examples of what exactly to say in text in the Text The Romance Back guide.

If you don’t put much effort into texting him, he’s going to feel that you’re not interested. If he feels this, he may not put in as much effort with texting you anymore.

So, what do you actually say to this guy you’re interested in? What should you text him? Well, why not start off with a simple and general message? “Hey, how are you?” is a personal favourite for many people all around the world. It’s simple, yet it’s giving them something they can easily reply to. You could also ask them what they’ve been up to.

If you’ve talked about something previously and you have something new to add to that, you could also mention that in the same text.

Hopefully from there, he should reply and things should flow. Other things you could do is let him know what you’ve been up to, let him know any interesting news you have found out about, or send him a joke you think is funny.

Things You Shouldn’t Text Him

While you can text someone more or less anything, there are a few things you should be aware of. Text messages can easily be read incorrectly. You could say one thing, but the person receiving the text may completely get the wrong end of the stick.

It is because of this that you should double read all text messages before they are sent out, and try and make things as clear as possible.

You can use smiley faces along the way to make this even more clear.

Another thing you won’t want to text this guy, is anything too personal. As a rule of thumb, don’t text him anything you wouldn’t mind his friends seeing. You never know who’s going to look in his phone or what he’s going to show his mates, so it’s better to be safe then sorry.

If you’ve ever thought “should I text him first” but you texted him first the last two times, don’t! Girls, this will appear way too needy. While there’s nothing wrong with wanting to text the man you like, there is such thing as over doing it.

If as in the above example it’s always you texting him first, you need to think about why this is. Maybe you’re texting him too much? Give him space, and let him text you first for a change. He may text you later in the day, or he might text you a day or two later. Let it be a nice surprise.

If it goes a few days without him texting, then he might not be as into you as you are into him.

Arranging To Meet In Person 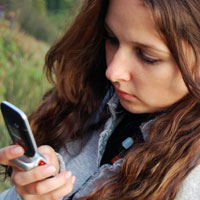 While text messaging is all well and good, you should try and meet him in person where possible. You can get to know someone a lot better and a lot quicker when you’re face to face. The perfect time to do this is near the end of the text convo, and it’s also a good way of dying the dialogue down. Saying something simple like “Do you want to meet up some time?” can get things going down that path.

It’s always best to arrange a date if you both agree, so the meet up has a set time. If you don’t put a date on it, it could keep getting put off too easily.

If you want to meet this guy in person and want to improve the chances of him agreeing, you should give him a reason to want to meet you.

Giving Him A Reason To Meet You

If there’s a real reason for you to meet, you’ll be a lot more likely to have this meet up. Even if it’s something like meeting to go to the cinema because you both want to see the same film, or meeting at your local chicken shop / restaurant because you’re both hungry.

You can easily make reasons up if there are no clear things to do. You can ask him if he likes films for example, then get onto the subject of what films are out right now. If he mentions he wants to see one that you also do, try and arrange for you both to go and see it together.

When it comes to text conversations, there’s one very cool tactic you can use to keep things interesting: Say goodbye to him first. Now wait a minute, why would you want to cut your conversation short I hear you ask? Well, for one simple reason: To keep things fresh.

In any texting conversation, things have the opportunity to become boring or even routine. At one point it may seem like you have nothing left to say to this person, or you may be struggling too hard to drag the conversation out. At this point, it would be a good time to say good bye.

This may sound counter productive, but it’s really the opposite. During this time where you don’t text each other, you will both have done more stuff in your life. This will give you something new to talk about when you do get back to texting each other.

Texting a man you like shouldn’t be too hard. If you follow the above tips, you should be fine with starting up a good solid texting marathon. Just say what ever is on your mind, but make sure you’re clear with your texts. The last thing you want is for them to be misunderstood.

Don’t worry about being the perfect texter or over thinking every little detail, just message them whatever is on your mind and let it flow. That is how to text a guy you like. 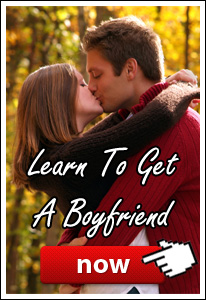